(the basket of dreams) 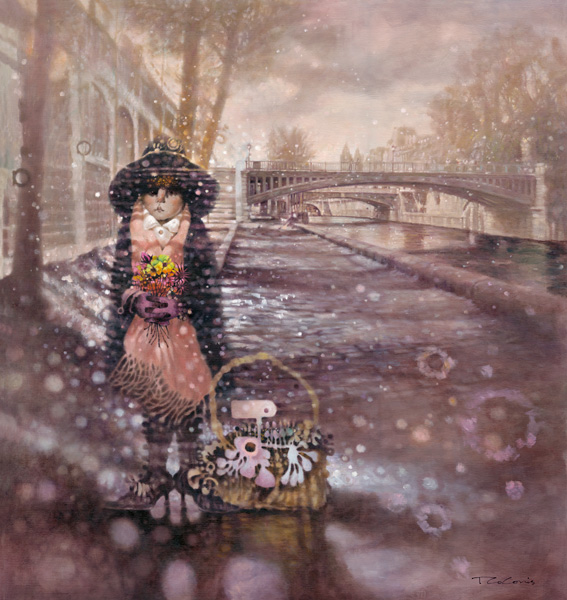 The character in this painting was created as a poetic response to the itinerant street sellers of Paris who jingle Eiffel Towers in front of the Louvre and hawk knock-offs in the Tuileries Gardens. When the weather turns, more appear—carrying umbrellas, gloves or water to tempt the wet, the cold or the parched.

This little urchin offers visual delights to comfort the soul: flowers in celebration of the first snowfall of winter. Ted placed her in a setting that is especially meaningful to him—the exact spot where he painted his first landscapes en plein air.

It was on our first trip to Paris together in 1980, the year that marks the beginning of the end of Ted’s life as a full-time illustrator. After nearly 40 years of satisfying the visual needs of others, Ted wanted to more fully develop his own vision. So we headed off to live and work in Europe in order to avoid being tempted by the next interesting assignment.

On our first day in Paris we went to the local art store and acquired everything needed to embark on this exciting new venture. As we started to set up a workspace in our apartment, Ted realized he needed to begin at the beginning. Leave behind the quiet and controlled environment of a studio and subject himself to the distractions and difficulties of the outside world.

As a further challenge, Ted wanted to paint a landscape—one that had been painted a thousand times before. A scene that would force him to look for the extraordinary in the banal. He settled on a spot on the Left Bank, directly across the Seine from Notre Dame and began the first of four views along the river. It was an enlightening experience that affirmed his conviction that he had more to say as a figurative artist.

Though Ted had long since retreated to the solitude of his studio, he returned to that special place many times to do a series of landscape drawings as inspiration for this painting.