(the spirit of the times) 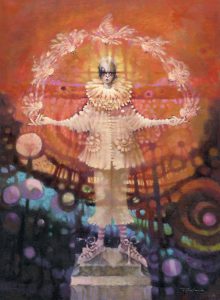 The genesis of this character is Pierrot, a melancholic mime who made his first appearance in Paris as part of a troupe of Italian performers in the mid 1600s. Over the years Pierrot’s persona has evolved and been reinterpreted not only by performers themselves, but also by artists, writers, poets and musicians. Though always portrayed as male, Pierrot possesses what are arguably more female characteristics: a naive and trusting nature and a quiet, gentle charm.

One of the most sensitive and sympathetic interpretations of Pierrot was painted by Antoine Watteau in the early 1700s. This large, rather enigmatic portrait captures Pierrot’s tender innocence, grace and dignity.

Ted has always been intrigued by the mildly androgynous qualities of Watteau’s Pierrot. After drawing the painting dozens of times in the Louvre, he was inspired to create a female Pierrot—a character that would blur and confuse the stereotypical gender distinctions even further. Her arched brow, penetrating gaze and gripping toes hint that her trusting nature extends only to her faithful birds.